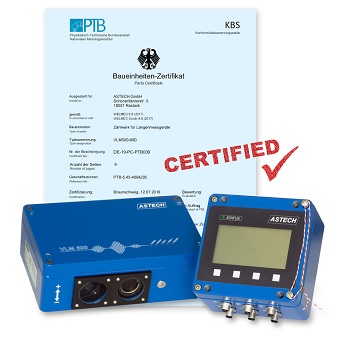 If measuring instruments are used in the public interest or in commercial or official traffic, the German law Mess- und Eichgesetz (MessEG), must be considered. For the purpose on the harmonisation of the laws of the Member States relating to the making available on the market of measuring instruments the European parliament adopted the Measuring Instruments Directive (short MID) 2004/22/EC and 2014/32/EU respectively.


In the sense of a type approval, the devices of the VLM500 series are considered as counters. So they are part of a length measuring device. A type approval for the counter itself cannot be obtained. Rather, an independent examination must be considered with the aim of being able to offer a pre-tested counter (certified by a parts certificate) on the market. In this case, customers are the manufacturers of length measuring machines that require a non-contact counter for their system. The examination was carried out successfully by ASTECH GmbH together with the German Physikalisch Technische Bundesanstalt (PTB). The exam consists of a theoretical and a practical part. Conformity to the software guide WELMEC 7.2 and fulfilment of the metrological properties of the MID have been certified.


The VLM500-MID consists of two units, the measuring device VLM500 and the display and storage unit CDB. Both are connected by a cable (length up to 15 m). The VLM500 is available in the existing variants A, D, L and E and can be equipped with optional pulse outputs (encoder signals), one analog output or field bus interfaces (Profinet or EtherNet / IP). The internal software deviates from the software of a standard VLM500 only in terms of the requirements for the WELMEC 7.2. Deviating from this is that the programming interface is only indirectly accessible. Due to the wiring, the VLM500 is parameterized via the CDB.


To conform to the gauge requirements the VLM500-MID is equipped with seals and leadings. The connection cable between VLM500 and CDB, for example, must not be removed in the safe operating mode. To ensure this inseparability, the screw connections are provided with a seal. In addition, the housing covers are provided with special screws that allow the attachment of a sealing thread and a leading. Parameter changes to the devices can only be made if a special programming adapter is connected to the CDB. Then the system is in unsecured mode. But since the plug for the adapter is also sealed, the parameterization should be carefully considered before the system is backed up.

We use cookies on our website. Some of them are essential for the operation of the site, while others help us to improve this site and the user experience (tracking cookies). You can decide for yourself whether you want to allow cookies or not. Please note that if you reject them, you may not be able to use all the functionalities of the site.